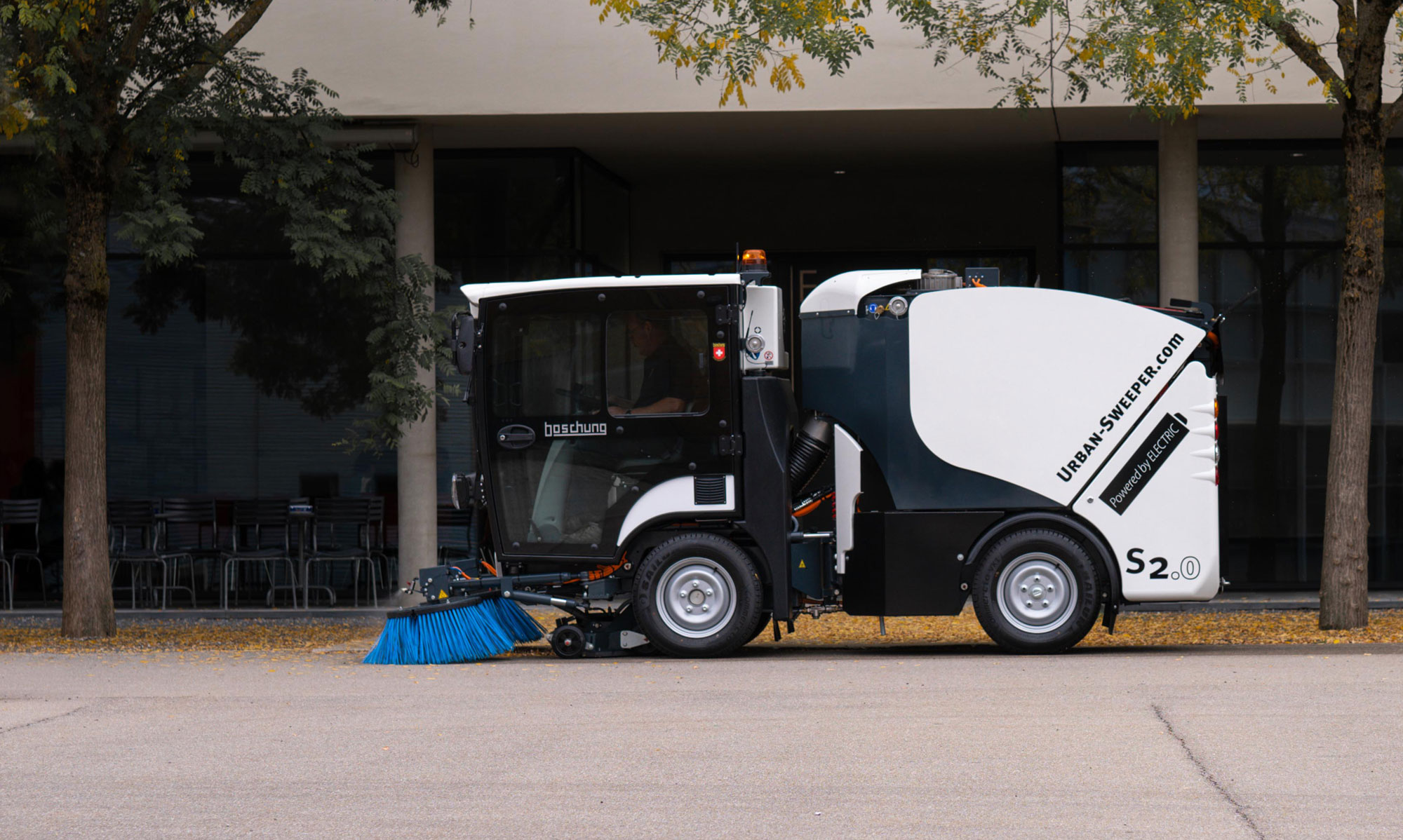 A new era of electric is here. Meet the Urban-Sweeper S2.0, the first fully electric street sweeper releasing 0 (zero) emission and engineered by Boschung. A 2m3 sweeper combining ease and suction power with the most progressive technologies of today. Street-smart, intuitive and compact, the Urban-Sweeper S2.0 was engineered and designed for maximum performance. The intelligent and innovative battery at the heart of the sweeper will grant you an entire work shift with just a 100 minutes of charging time. With today’s possibilities and the advanced engineering of Boschung, the Urban-Sweeper S2.0 can now be fully autonomous.
This is electric done the Boschung way.

Fast charging to get the work done

with the Supercharger or 8 hours with the Standard Charger 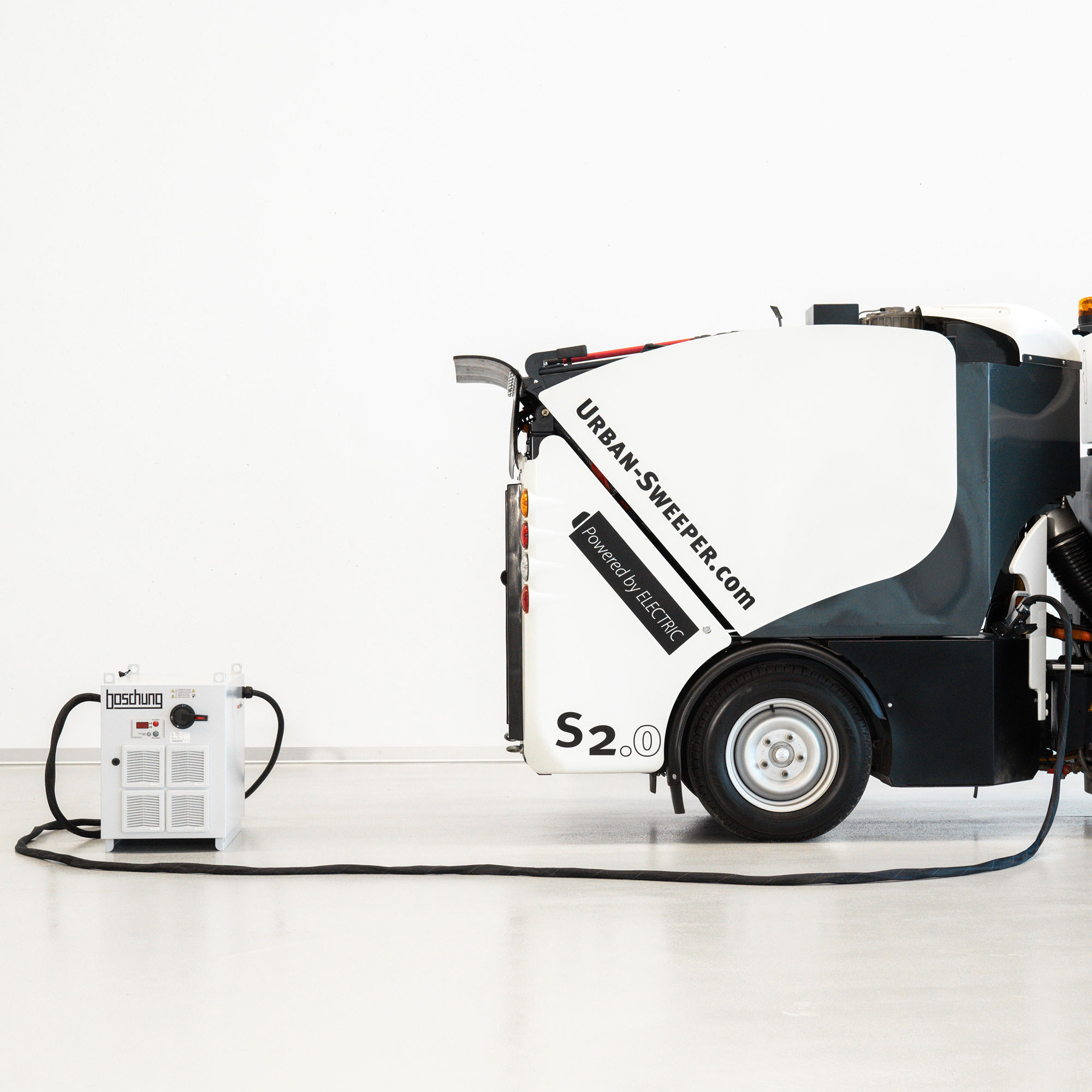 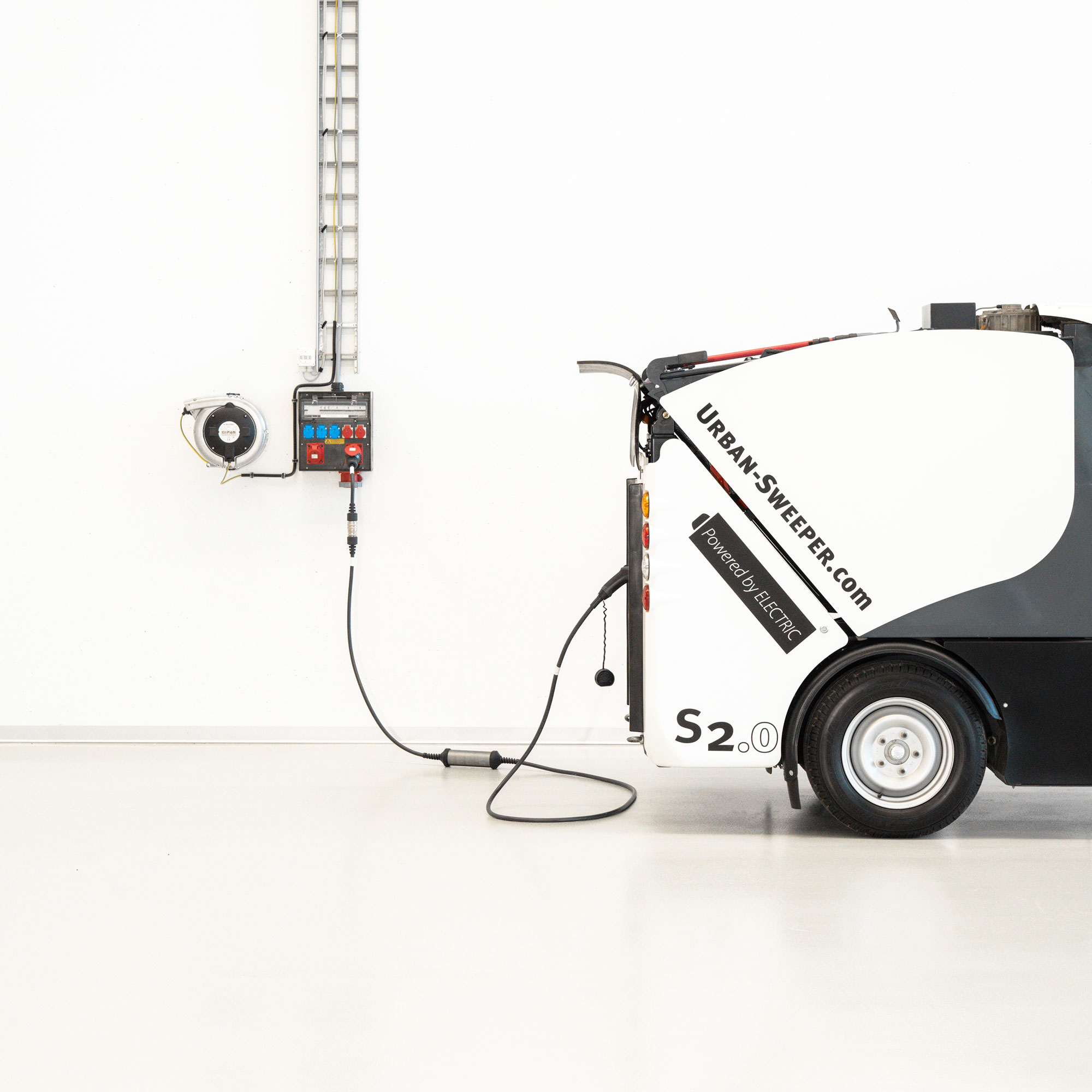 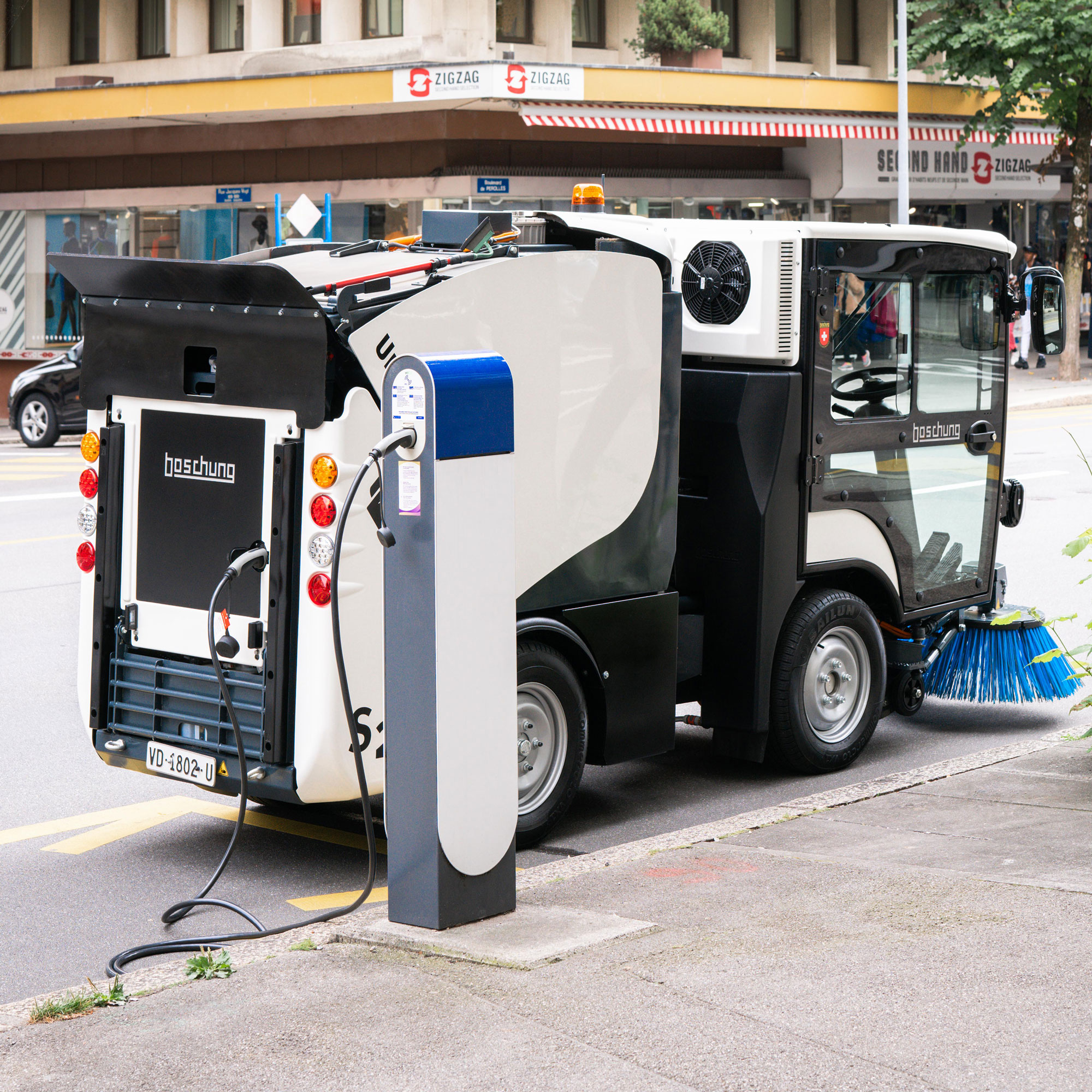 The Urban-Sweeper S2.0 was designed with efficiency in mind. Providing an exceptionally light weight and narrow width for maximum reach and suction performance. Urban-Sweeper S2.0 can fit into the narrowest streets while providing maximum performance. With a chassis made out of a high resistant metal, the sweeper can hold a total gross weight of 3,500 kg or 4,000 kg. 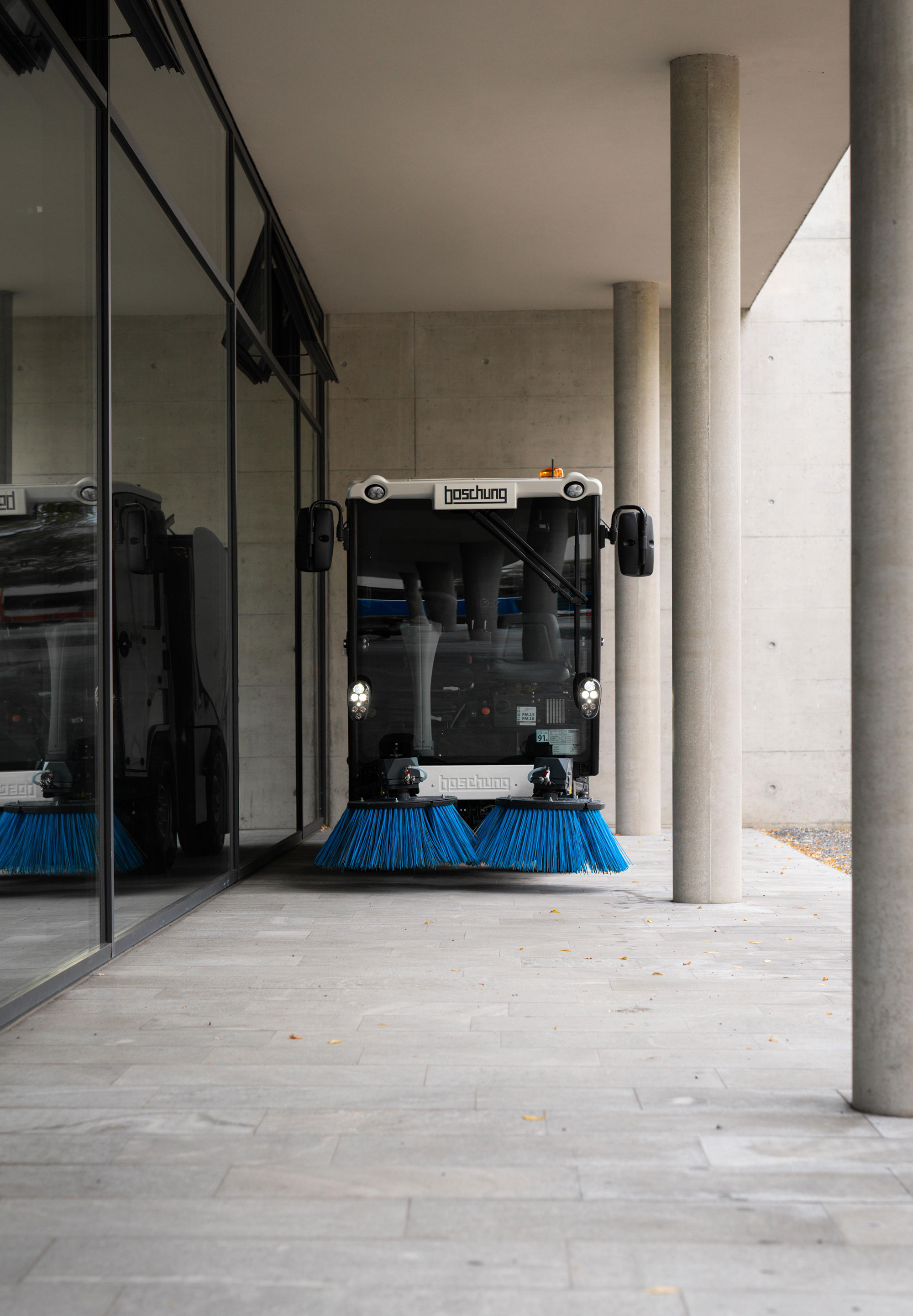 The agility of the articulated steering dexterity

An articulated steering responding to the needs of agility and flexibility required for precision with a 3.3 m turning radius.

Because clever skills are most important when it comes to safety, the oscillating suspension of the Urban-Sweeper S2.0 give the 2-wheel drive the grip of an all-wheel drive. Getting up and down curbs has never been as easy and full of stability.

Intuitive and effortless handle in just one hand

Tailored to use with ease, the double joystick control unit fitted as an extension of the center armrest of the Urban-Sweeper S2.0 gives you the ability to handle all your work tools in just one hand. 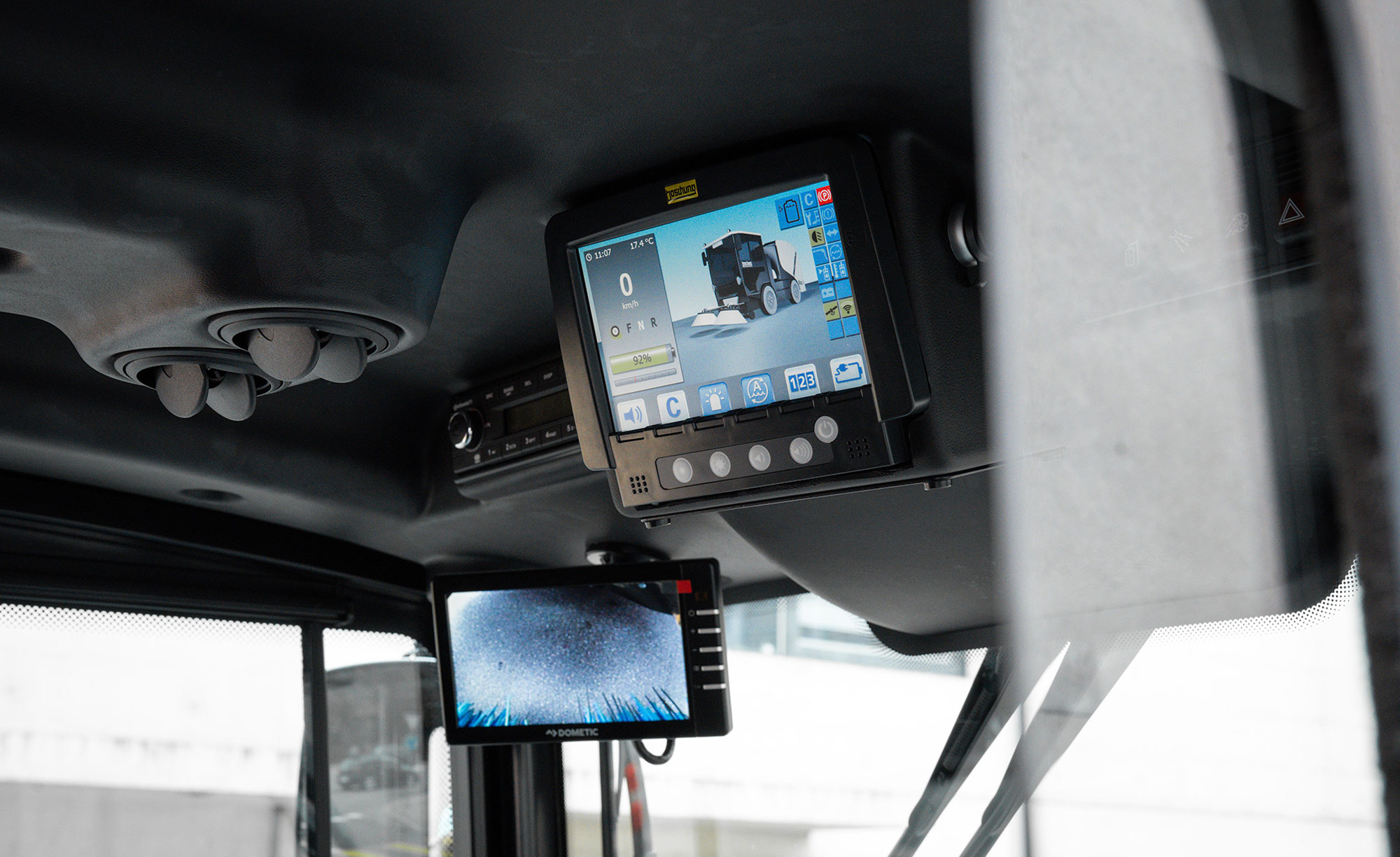 Displaying your vehicle status, information and intelligent functionalities, the touchscreen control unit of the Urban-Sweeper S2.0 also gives you an overview of the battery management system.

A panoramic cabin built around the driver

Designed to offer the driver the best display on his work area, the two-seater panoramic cabin was built for maximum comfort and flexibility. The transparent floor panel gives the driver a direct view onto the suction mouth.

The walk-through cabin offers the driver the safety to enter and exit the vehicle on either sides. Comfort is ensured with a temperature-controlled filtered air ventilation.

At the heart of the Urban-Sweeper S2.0 is the battery, a powerful muscle that keeps the vehicle moving, and whose performance determines how efficient the sweeper can be. Innovative materials and design help optimize the battery’s capacity, durability and safety, making this one battery built to perform. 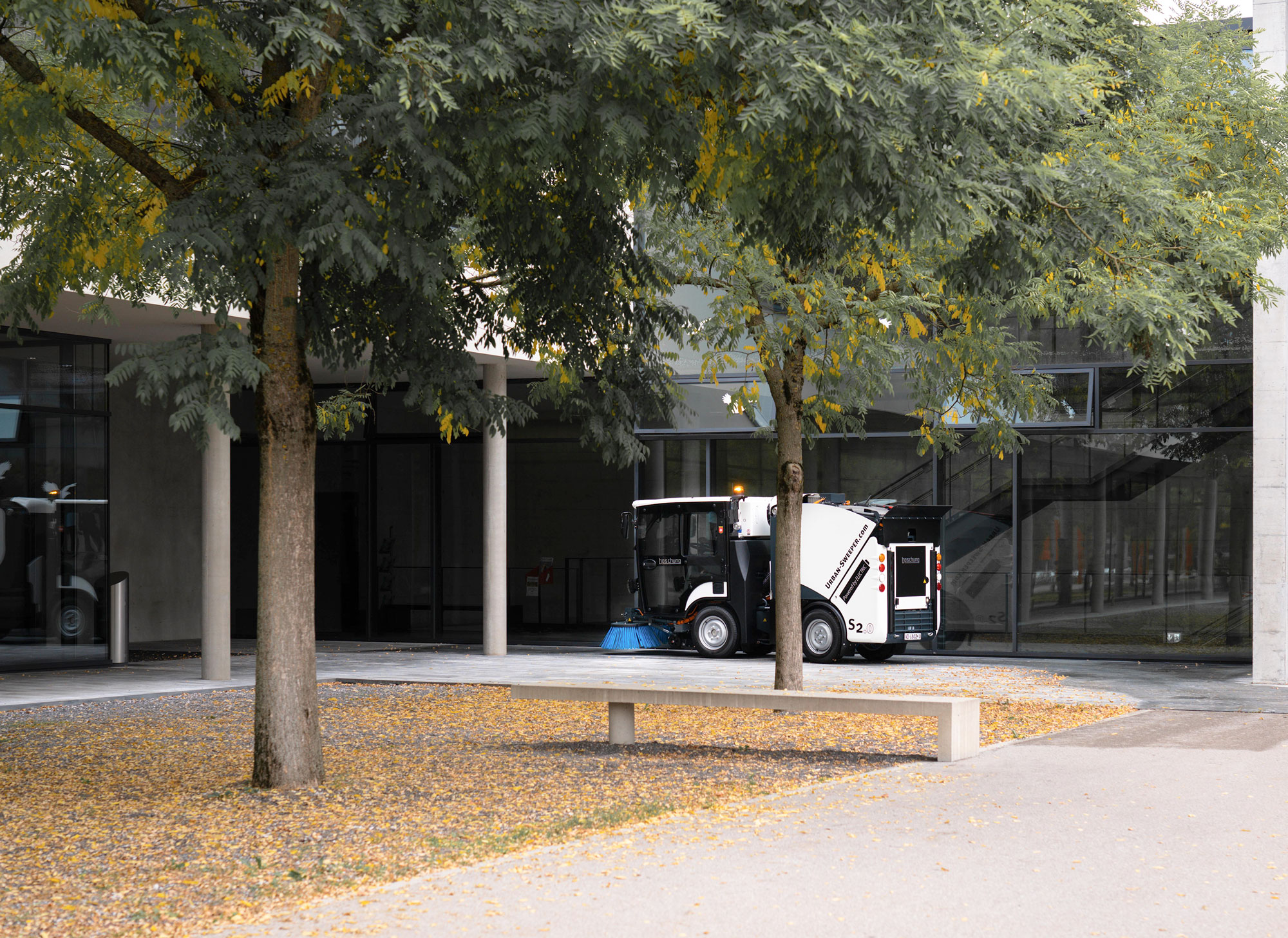 The 54.4 kWh lithium-ion battery counting 12 modules and a total of 4320 cells is integrated directly under the Waste hopper compartment providing energy to the powertrain with its 2 all-electric front wheel engines, 2 all-electric broom engines and the all-electric turbine.

24 temperature sensors were engineered to guarantee the battery surveillance at all time. The automatic battery heating and cooling system ensures harmless use of the battery throughout of the seasons. An overcharging protection circuit manages the charging of the battery. All intelligent features of the battery were developed to optimize the battery’s capacity, durability and safety. 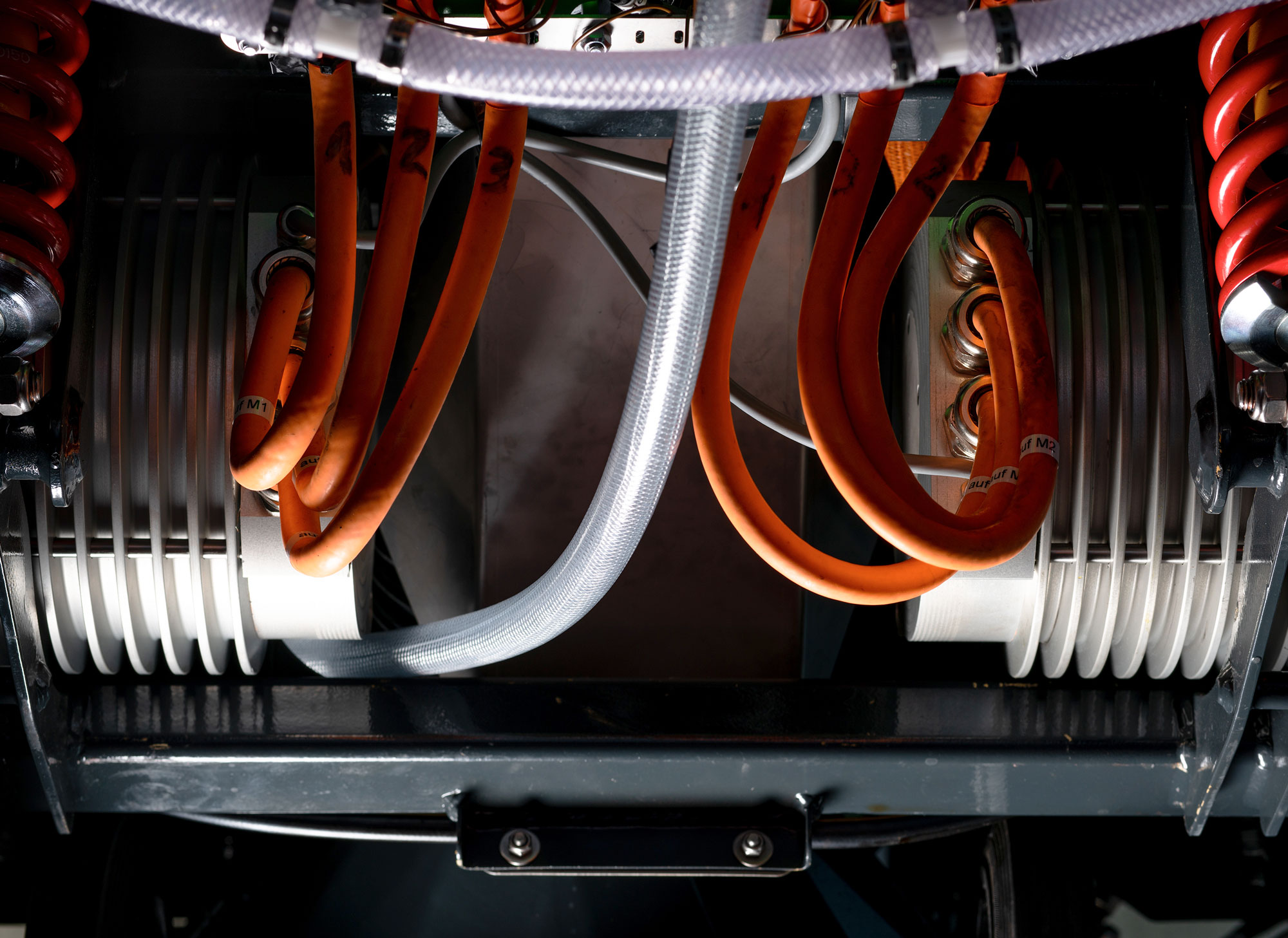 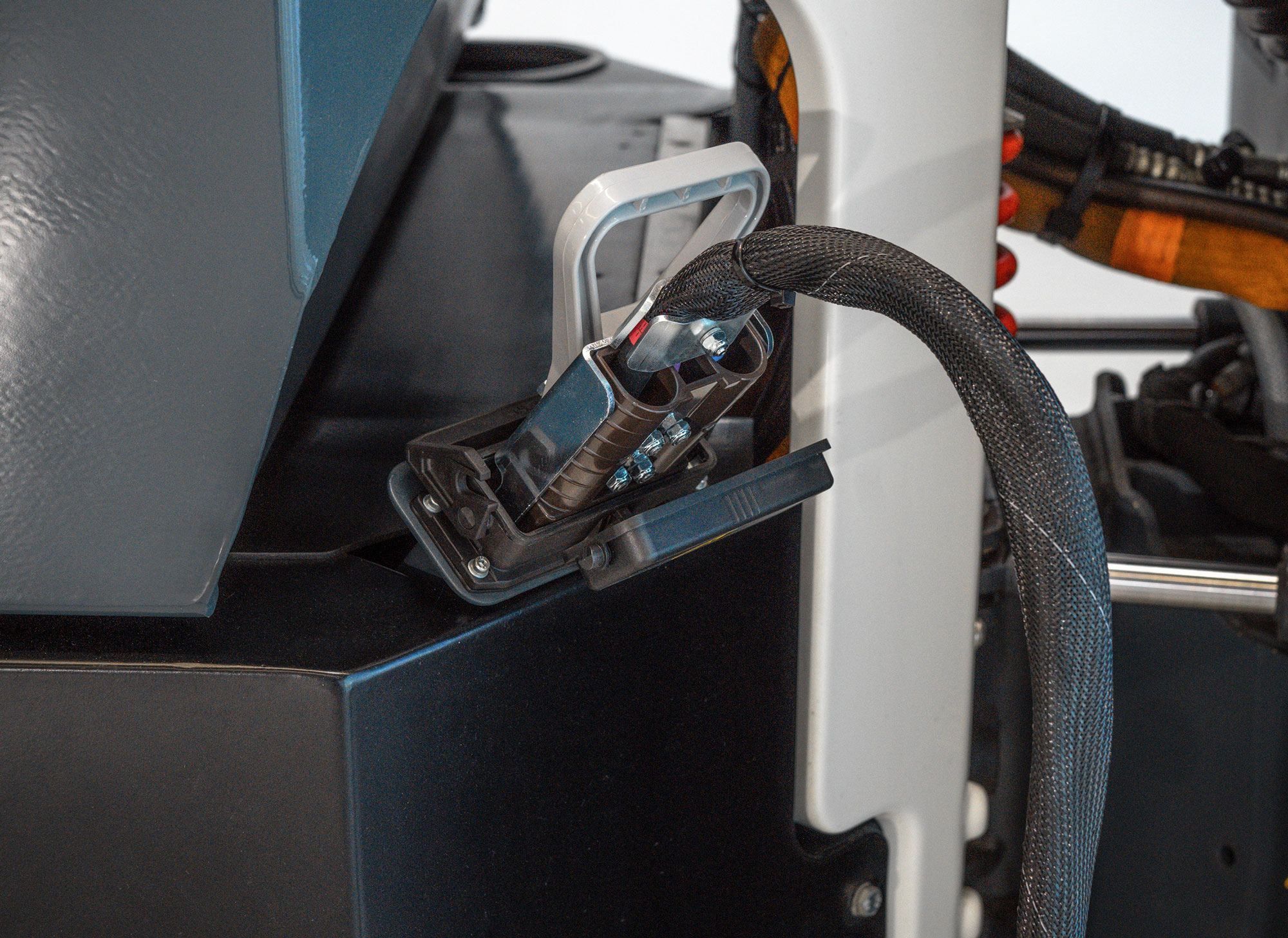 Equipped with a combination of lidars, cameras, mm-waves radars and gnss antennas the Urban-Sweeper S2.0 becomes a fully driverless sweeper. 360° coverage of its surrounding environment, autonomous wake-up, autonomous parking, the driverless street sweeper can not only be used in closed areas, it can safely sweep the public streets with a level 5 certification. Switch from autonomous to manual at any time.

Costs
Emissions
EUR
EUR
In 0 years you will save EUR 0 on operating costs with the Urban-Sweeper S2.0 in comparison to a diesel engine
Years
Cost of ownership
Electric Urban Sweeper S2.0
Euro 6 Diesel Sweeper

How do we work this out?

Costs are for 1 x 8 hour shift per day 20 days/month for 12 months. Costs are based on a Euro 6 Diesel engine consuming an average of 8 l/h. Prices and calculations are based on taxes and energy costs of Switzerland.

Your street sweeper is connected

Every Urban-Sweeper S2.0 is an extension of its driver, and now with the bVision platform that connection is even stronger. bVision unlocks a whole suite of surprising and integrated features for the ultimate connected work tool experience. With the refined engineering of Boschung and the limitless possibilities of today’s connectivity, bVision offers better ways to do simple workday activities. 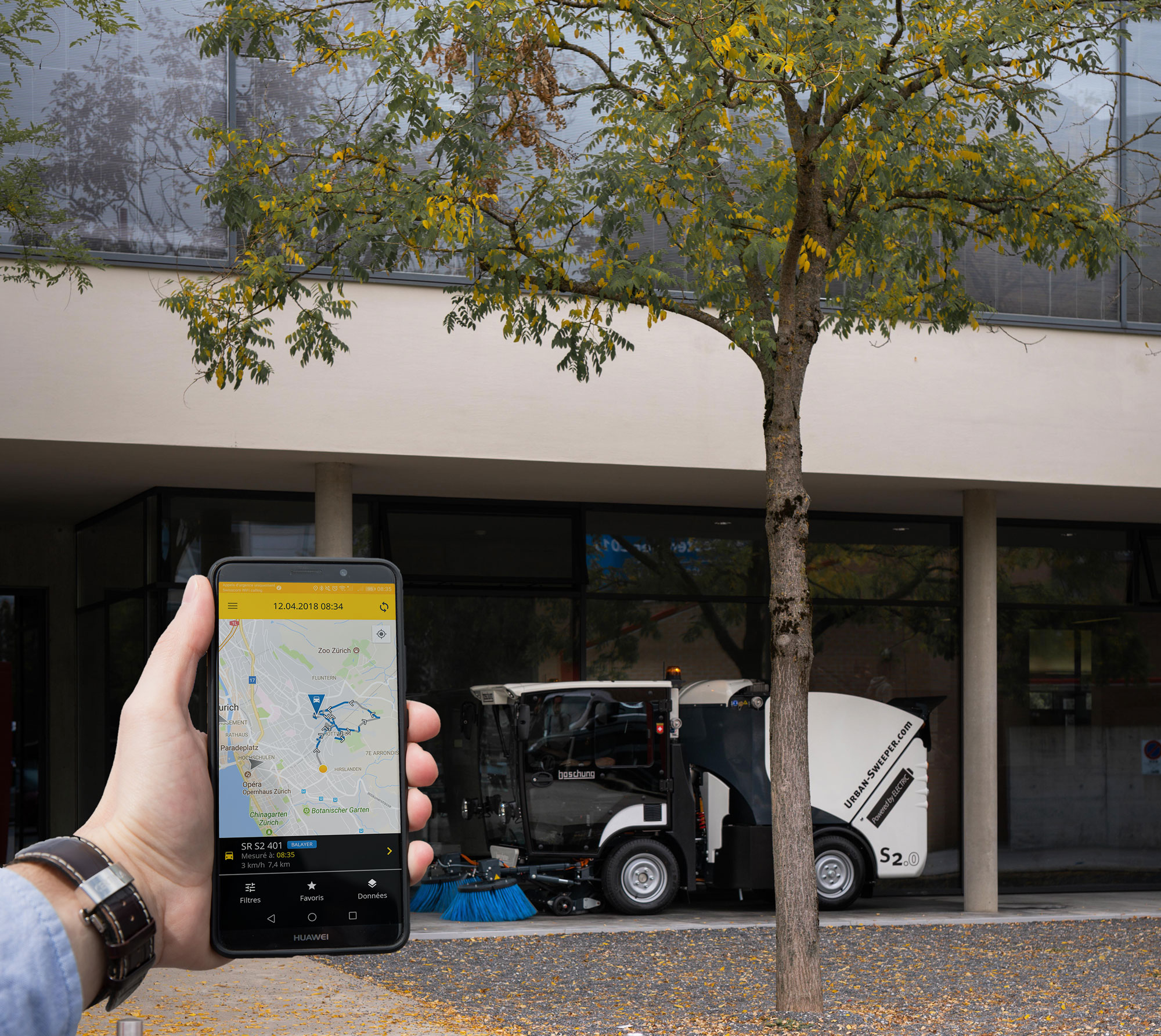 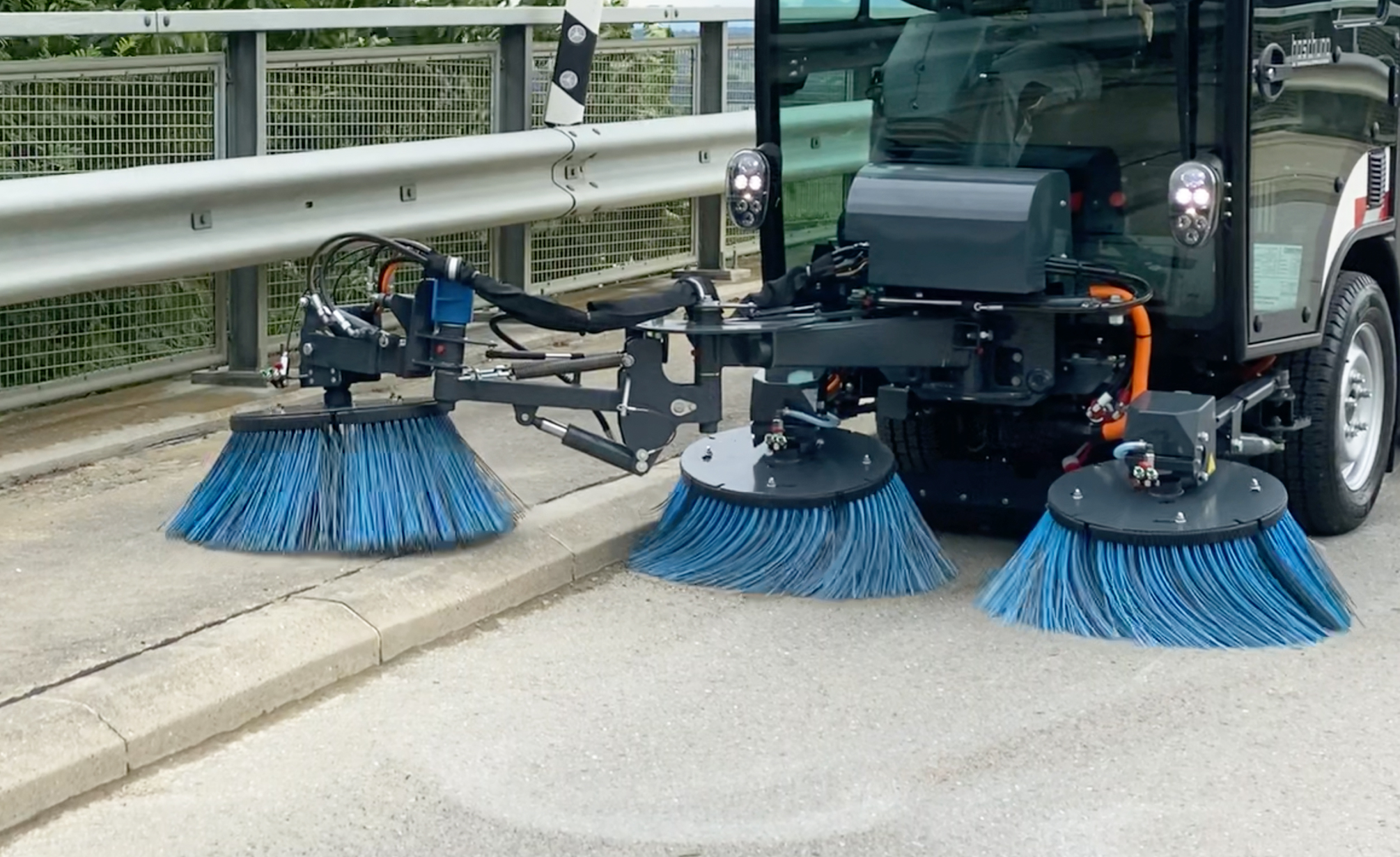 Enlarge the sweeping reach of your Urban-Sweeper by adding a 3rd brush in the front. 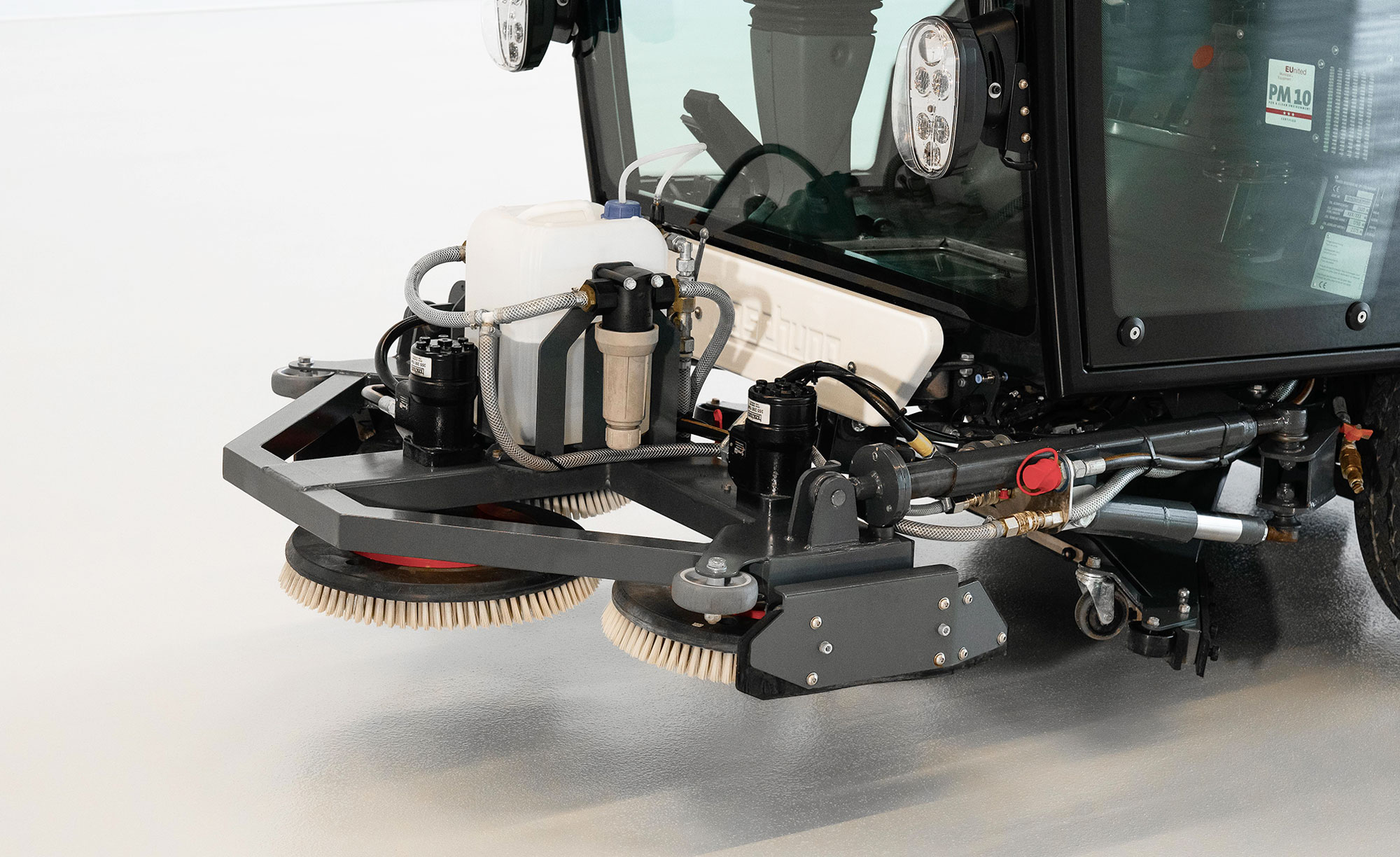 Handle the heavy-duty cleaning and disinfecting process with the Urban-Sweeper and the mounted scrubber. 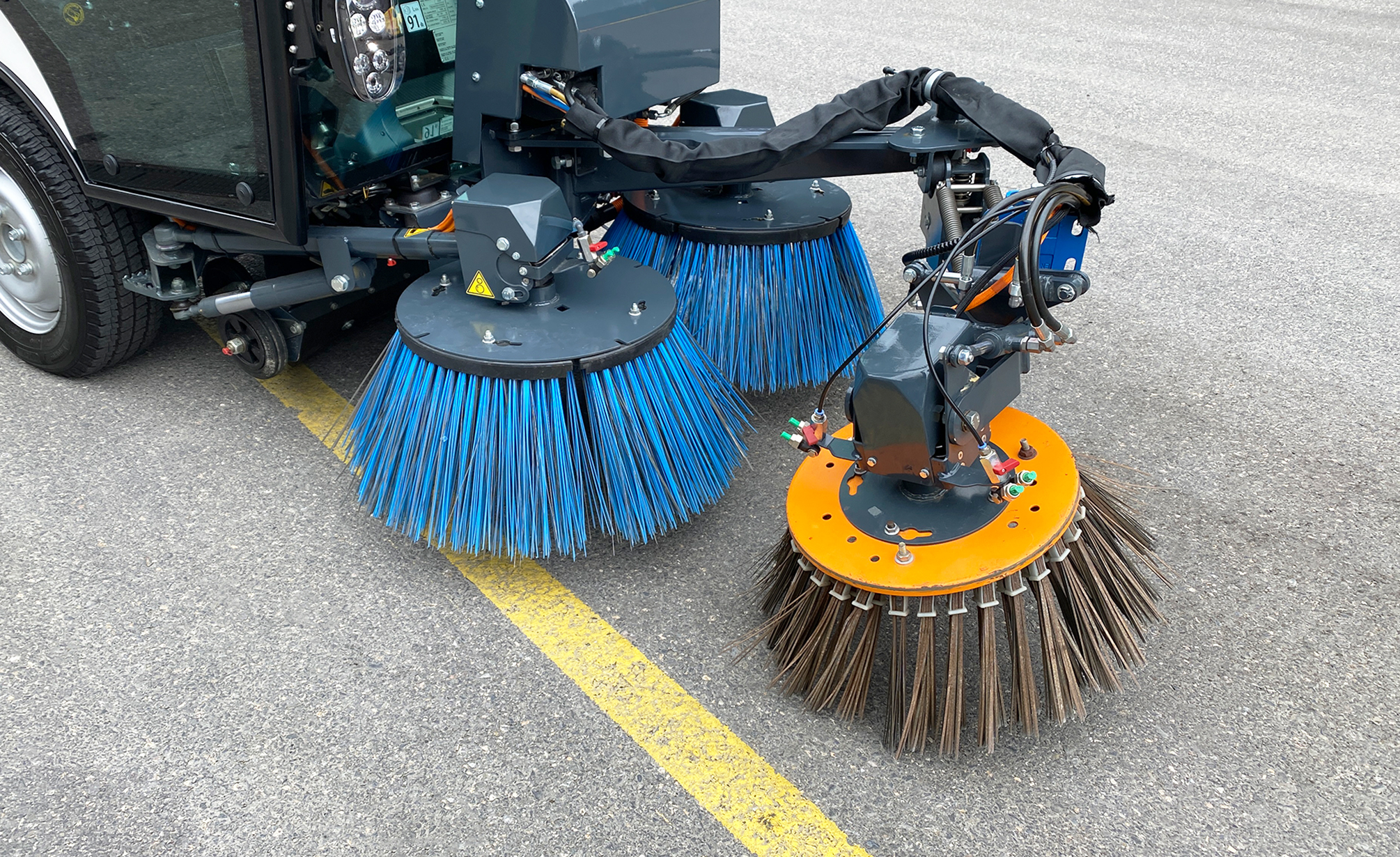 Remove unwanted weeds without the use of chemicals with the Urban-Sweeper weed brush. 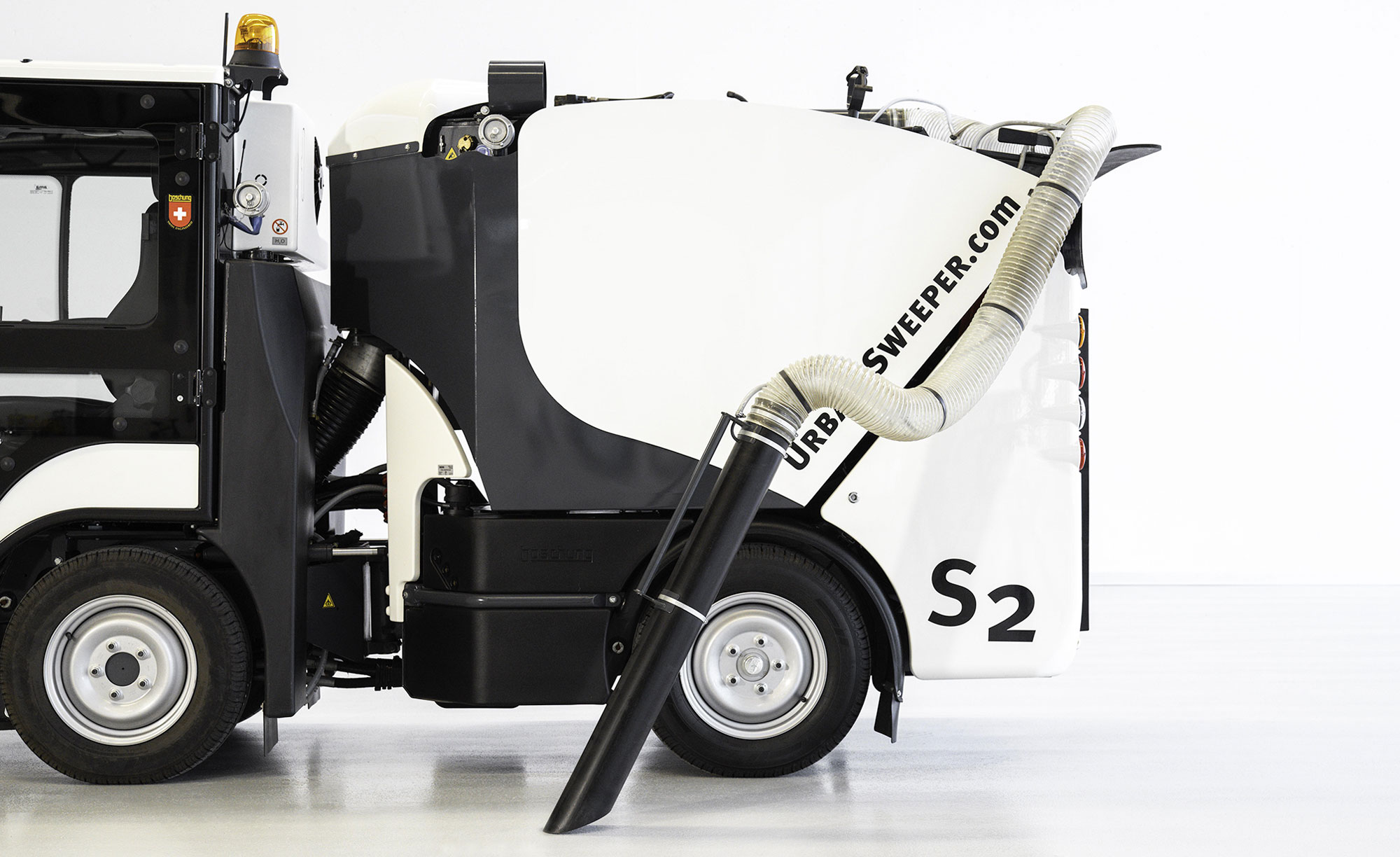 Reach for small areas around the street sweeper with the swivelling hand suction hose stored above the hopper. 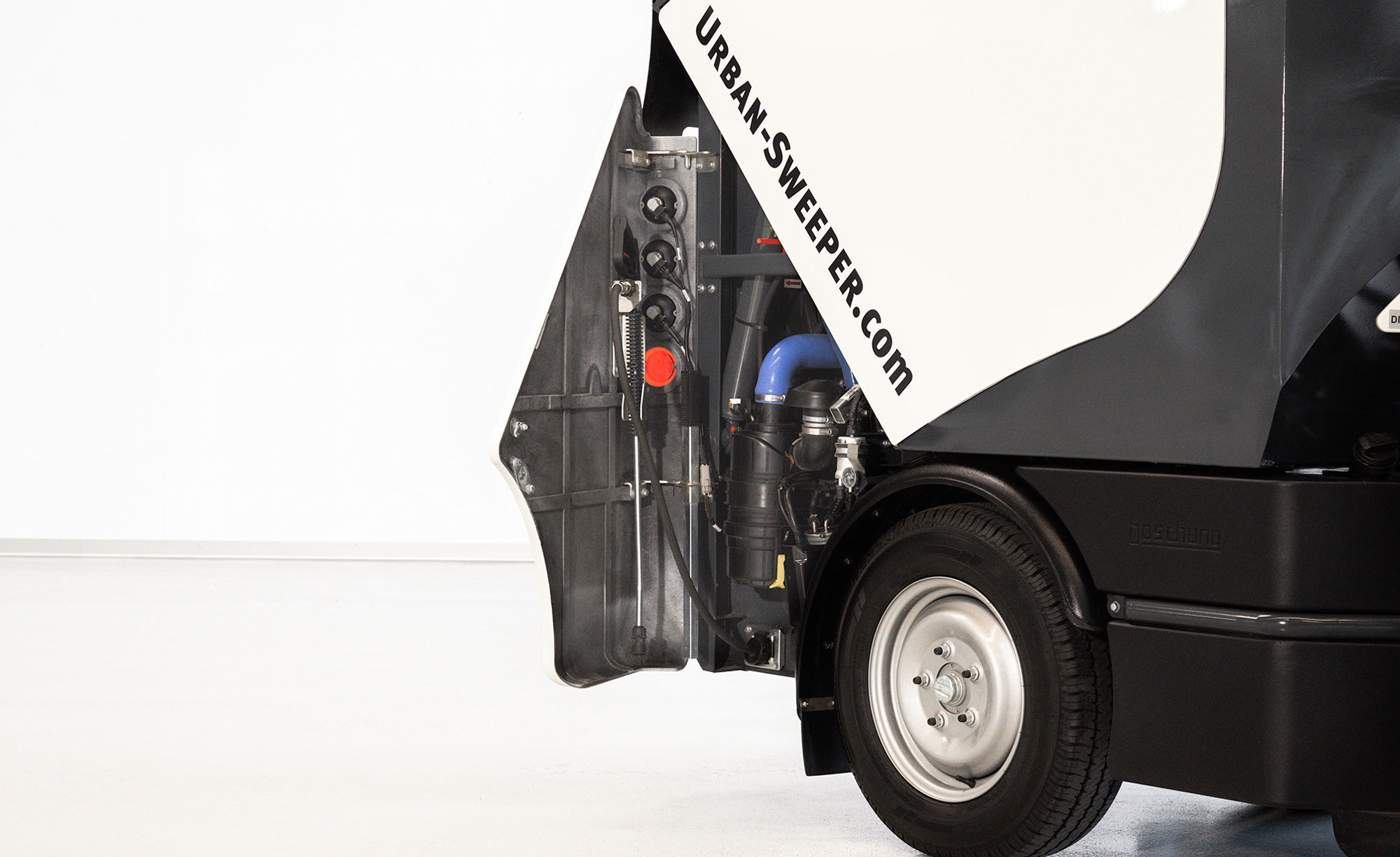 The powerful high pressure water hand cleaner of the Urban-Sweeper will wash the toughest places. 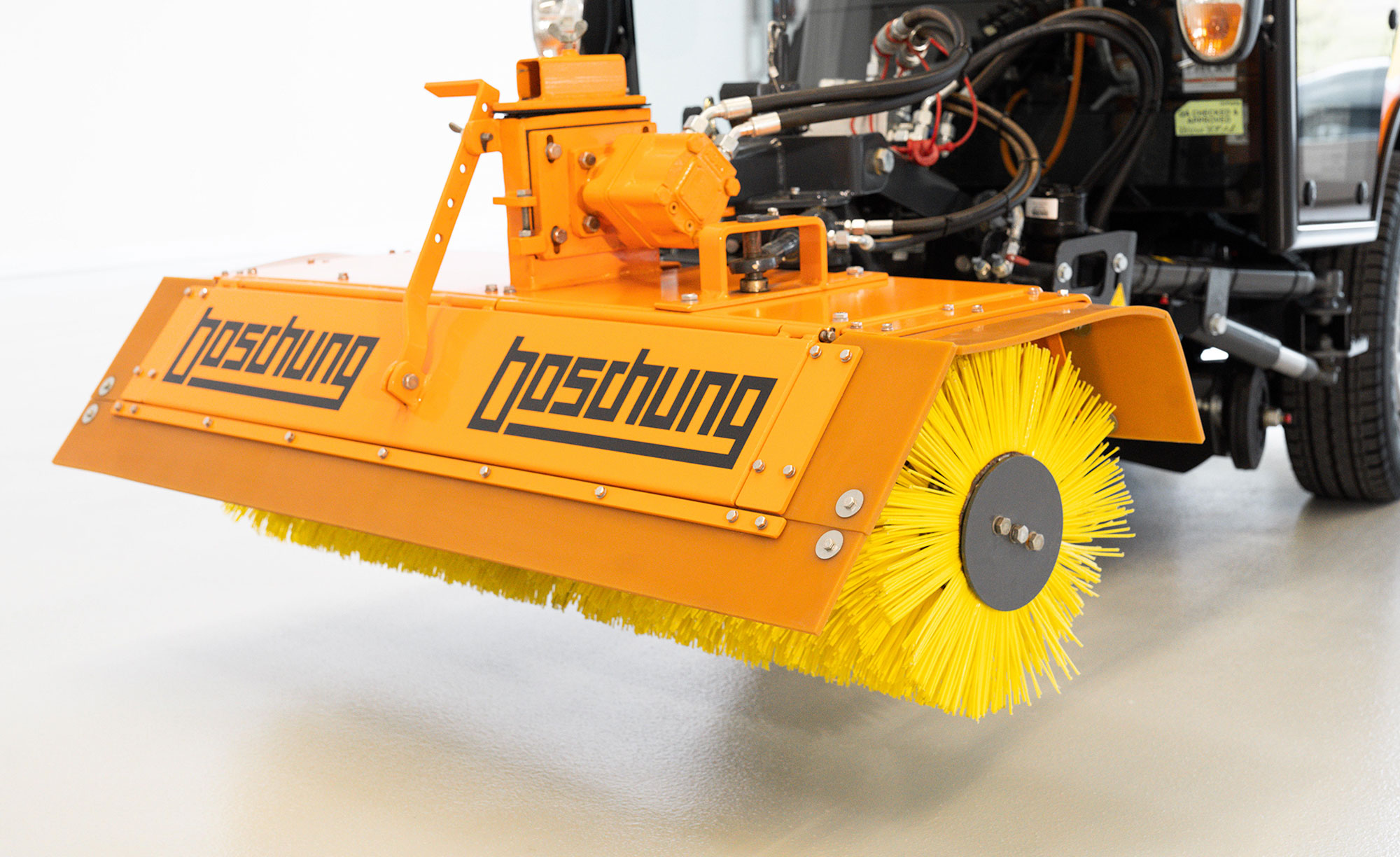 Operate the Urban-Sweeper to brush snow off desired areas with the front broom. 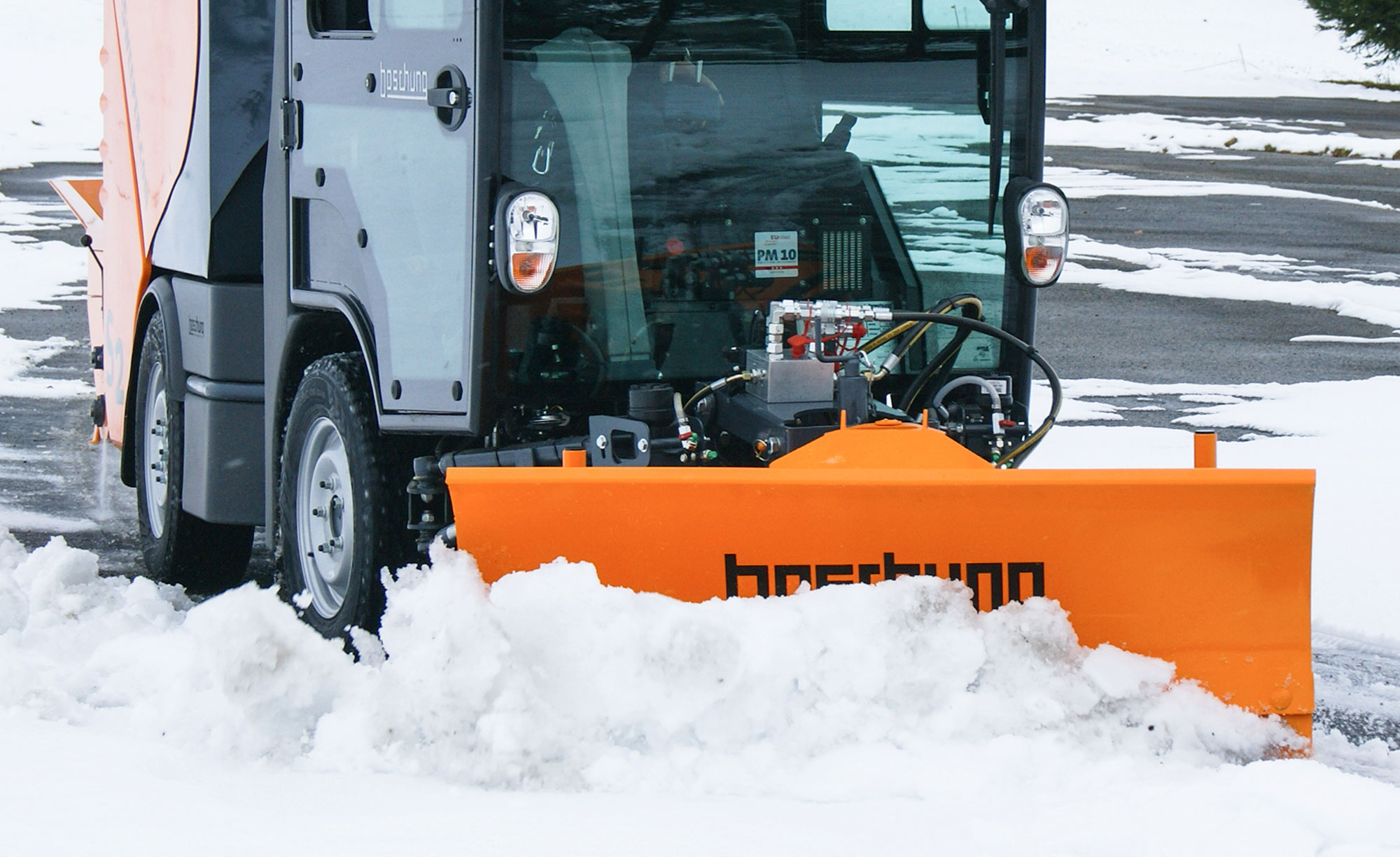 Turn the street sweeper into a snow removal vehicle with the mounted snow plow. 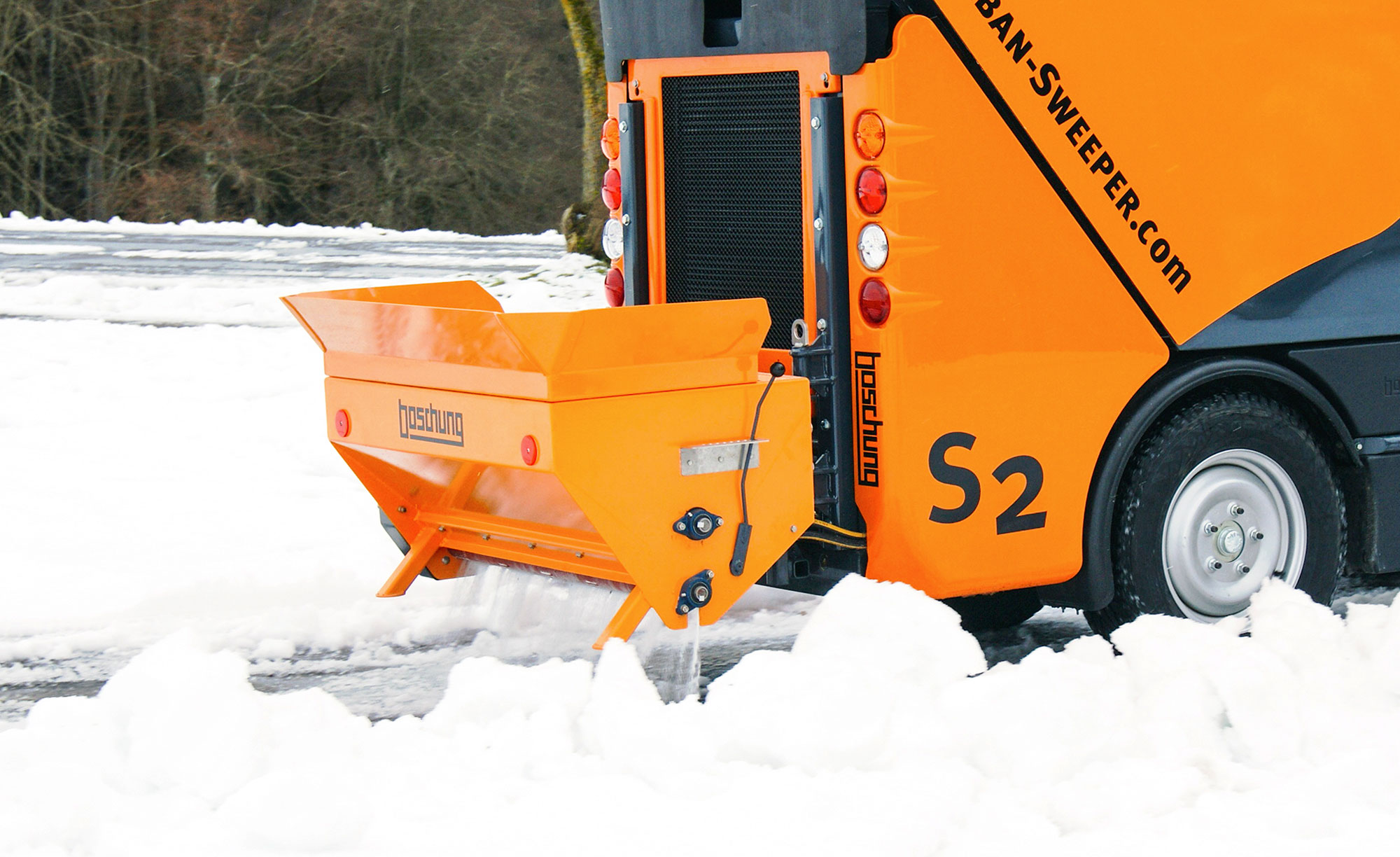 During winter, use the Urban-Sweeper as a salt spreader with the rear mounted roller spreader. 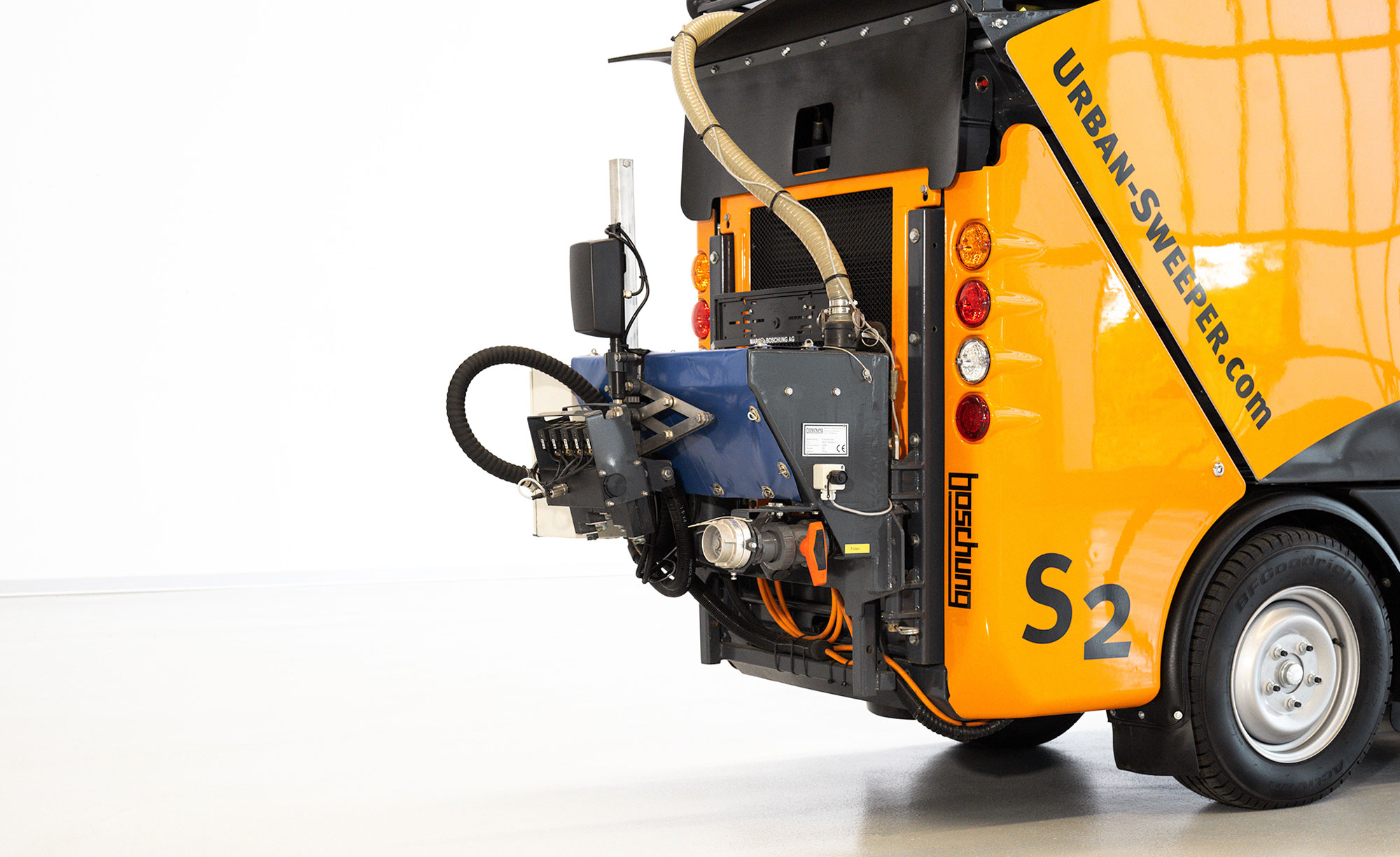 Use the volume of the hopper in the winter and turn the Urban-Sweeper into a liquid spreader.

In November of 2018 Nottingham City Council purchased four «Boschung Urban-Sweepers S2.0» machines from Bunce UK Ltd, these were jointly funded through a successful bid from the Government’s Joint Air Quality Unit’s (JAQU). The first four sweepers came into service on the streets of Nottingham in May 2019. 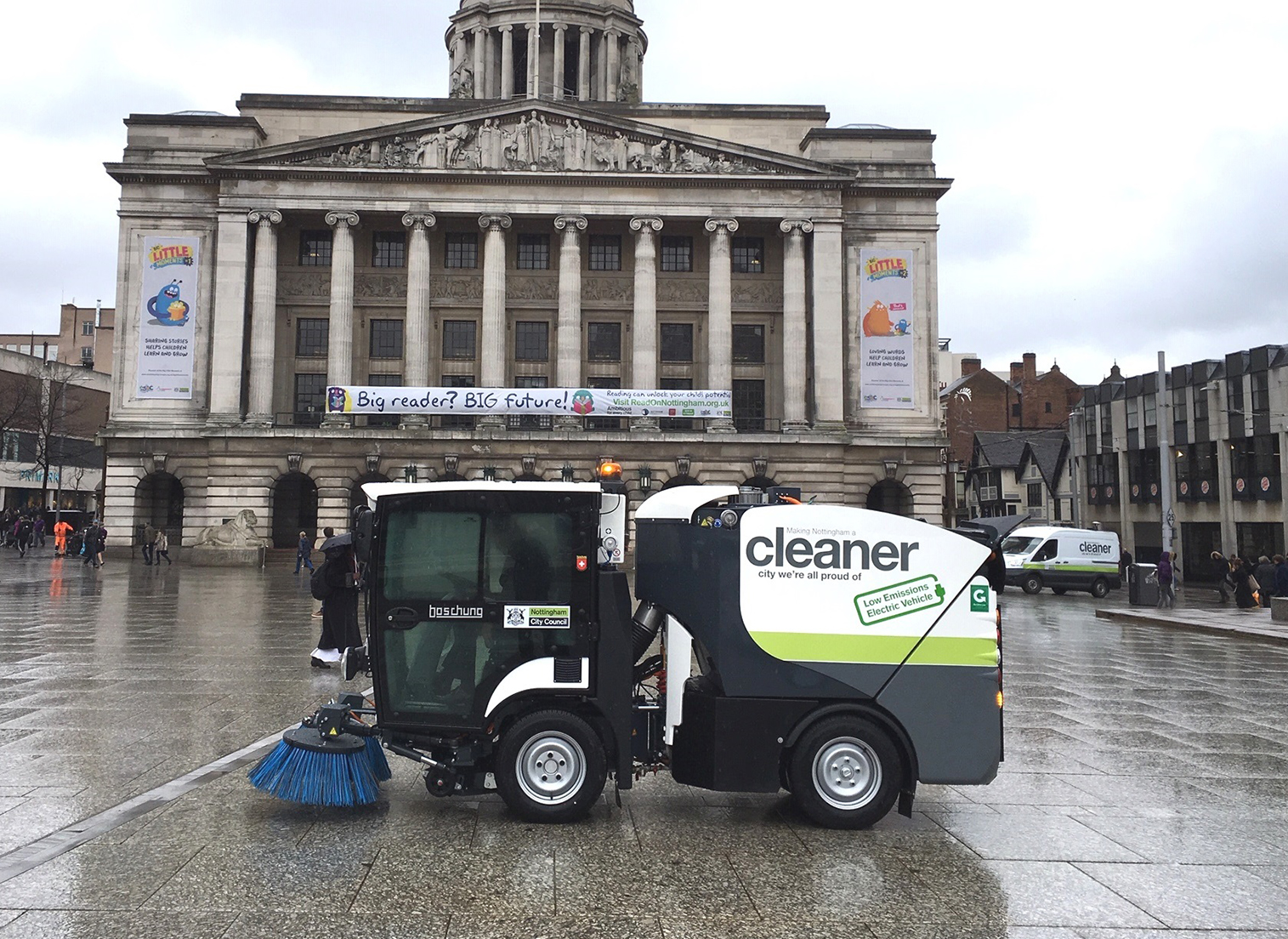 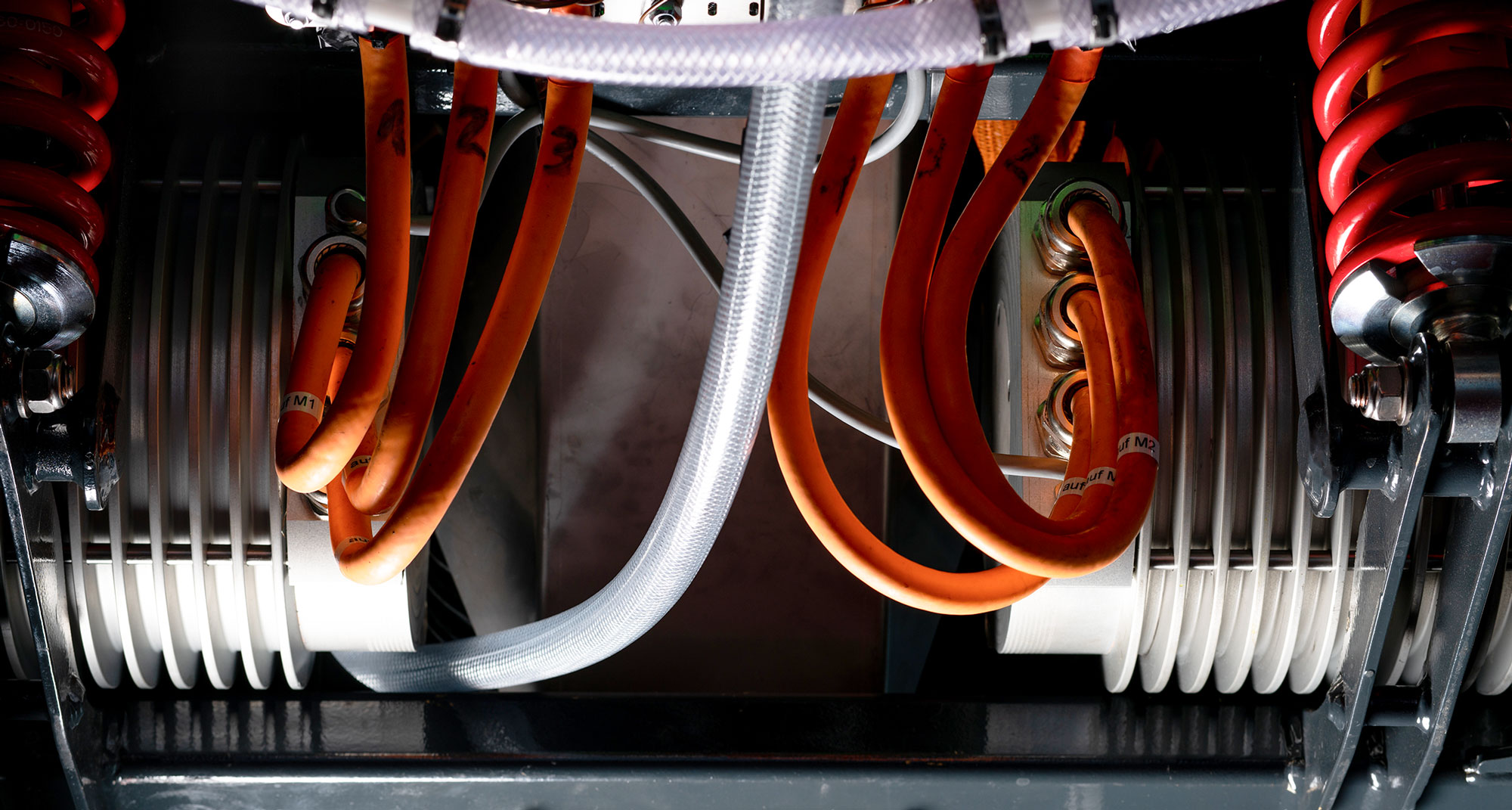 Talk to our expert about the Urban-Sweeper S2.0

Enquire about the Urban-Sweeper S2.0